An Easy Way to Sort Out Books

I am happy to report that the sorting of the books is finished. It was a task I had been dreading for ages, but in the end it wasn’t too bad at all.

New readers might not have seen my previous post, where I talked about what I’ve done to increase the amount of shelf space while not using up any more of my room. But here’s how I sorted out my 900 books, and how long it took.

Continue reading "An Easy Way to Sort Out Books" »

Happiness is a warm book 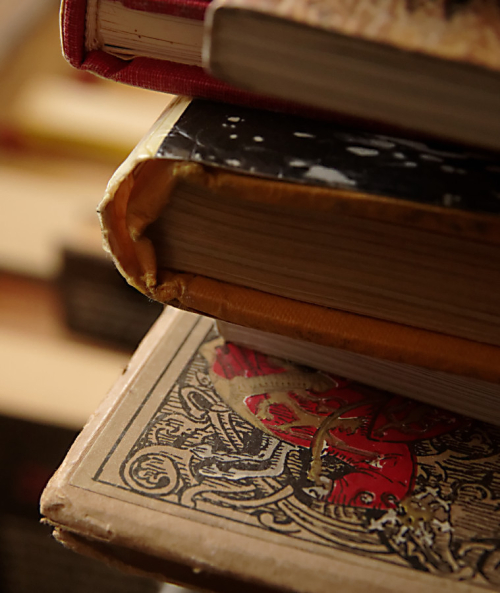 The sorting of the books is going well and I haven’t found anything too surprising or nasty, so far. But I have found:

A mouse nest at floor level between two bookcases, from a couple of years ago when the mouse chewed through the phone and internet cable behind the bookcases.

Luckily the mouse seems to have got nearly all of its nesting material from the waste paper bin, apart from, to my surprise, part of the spine of a photography book as long and wide as the mouse.

It had been hanging loose from the book anyway but now I can reattach it. I’d vaguely wondered where it had gone.

Mould in the coldest corner of the room, on the backs of furniture and on the wall; there’s traces inside the chest of drawers that used to be in the corner too, but so long as it hasn’t affected the photos in the drawers I’ll be alright.

I’ve cleaned the mould off with a white vinegar solution and have rearranged the furniture to keep that corner clear. I will fix a small tubular heater to the wall to deter the mould.

Two books of photographs I’ve not finished; each has book marks part way through. I’m looking forward to finishing them when all the books are back on the shelves.

Some out of date catalogues and maps. They are far too old to be useful, but not old enough to be interesting. But I’ve also got a few catalogues that date back to around 1950; now they are of interest. I might be posting about them later.

Lots of dust; a paintbrush is just the job for removing it from the top edges of books.

Despite all of this, progress has been a bit slow as other work has taken precedence (I don’t just sit at the keyboard all day and write blog posts, you know) and I’ve had to do some garden work that couldn’t wait.

The photography books are put away, as are the rest of the nonfiction books. I’ve bought an extra shelf for each of my three Ikea Billy bookshelves, from the Milton Keynes branch of Ikea.

But that’s not what I meant when I said in my previous post about this that I was buying more shelves; I was thinking of two complete pieces of furniture. 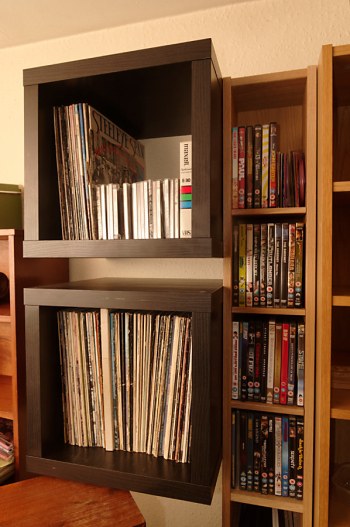 From right to left, a Billy bookcase, a Gnedby DVd/Cd shelf, a couple of Kallax units with a stereo speaker below, and a bookshelf on top of a chest of drawers.

One is an Ikea Gnedby; my 80 or so DVDs which were taking up valuable bookshelf space now have their own home. The Gnedby is just 20 cm/7.9” wide and takes between 40 and 60 7¾” tall paperbacks; just the job if you are short of space.

The LPs and CDs also took up some book space, and a couple of cube shaped Kallax wall mounted units were just the job. It would have been one two cube unit, but they only seemed to come in white and it would have stuck out like a sore thumb. Total cost was £92. 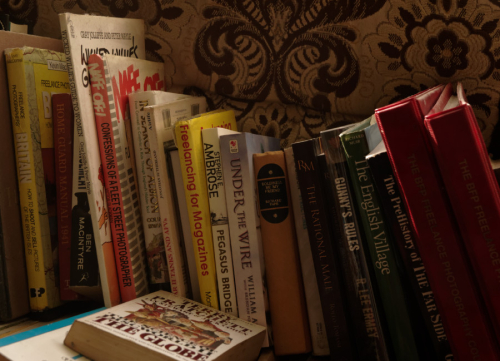 Books sitting comfortably on the settee

With a bit of luck when I’ve finished there’ll be enough space for every book with room for more, and not two layers deep either.

It’s far nicer to stay indoors, keeping the fire fed with coal and wood and sorting books, than it is to be out working in the garden in this week’s icy winds. It will be nice to use the settee in front of the fire for its proper purpose again, instead of the present use as a big comfy bookshelf. 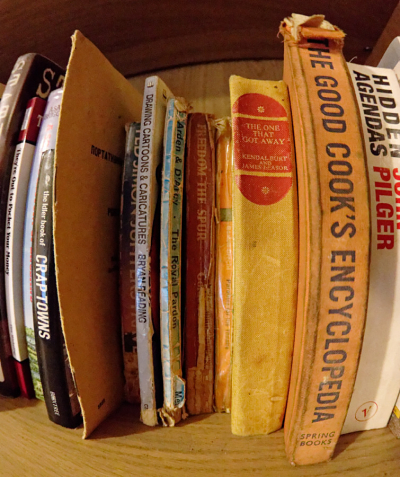 It's no wonder I can’t find anything.

In just this small portion of my shelves I have thirteen books in a mix of categories.

There’s tales of journeys, a couple of plays, an instruction manual in both Russian and English, a book on drawing, and more, all mixed together.

I have several series of books that I just can not start to read again, because I have no idea where the first book is. Or the second. It doesn't help that I have more books than shelves, and that I keep acquiring more books.

Nearly all my shelves are like this, and it's been driving me mad.

It’s time for a sort out and I've already started; the settee is covered in books, furniture is going to be rearranged, and more shelves will be bought. Is it just me that gets into this state?