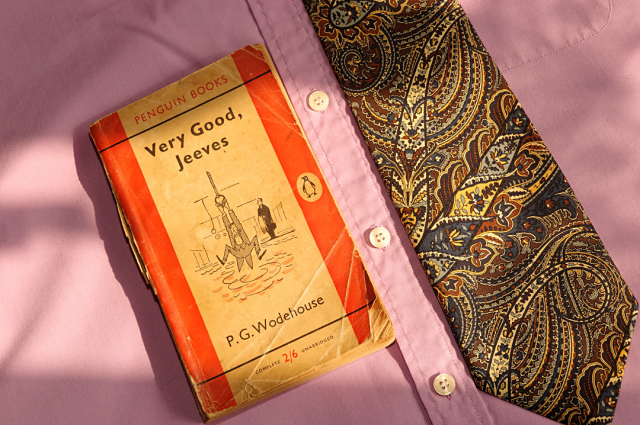 “‘Very good, sir. Pardon me, sir, are you proposing to appear in those garments in public?’”

P.G. Wodehouse's Reginald Jeeves is, of course, the valet to Bertram "Bertie" Wilberforce Wooster. He is man who is highly intelligent with a keen eye for the finer points of human psychology.

This is just as well, since Bertie Wooster, though a fine and genial fellow and most willing to lend a hand to his friends and relatives, is not the sharpest tool in the box. This means that Jeeves has to come to the rescue in each of these eleven stories.

Sometimes there is a battle of wills over Wooster’s choice of clothing, and in one case over a vase. Jeeves wins these battles, though he is the servant, and Bertie is his master. 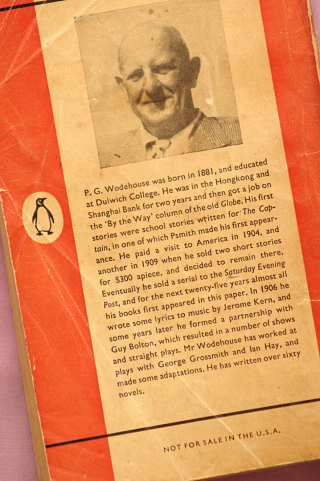 The Great Wordsmith in question.

Most of you will know of this pair so I’ll not go on, but P.G. Wodehouse had a real way with words, so if you aren't familiar with these stories here are some quotes from the book to whet your appetite:

(Jeeves is serving breakfast. Many of the eleven stories in this book begin at the breakfast hour, or close to it)

“He uncovered the fragrant eggs and b., and I pronged a moody forkful”

“It was the sort of nasty, rasping voice you sometimes hear shouting ‘Fore!’ when you’re one of a slow foursome on the links and are holding up a couple of retired colonels. Among the qualities it lacked were kindliness, suavity, and that sort of dove-like cooing note which makes a fellow feel he has found a friend. I did not linger.

“Those who know Bertram Wooster best aware that in his journey through life he is impeded and generally snootered by about as scaly a platoon of aunts as was ever assembled. But there is one exception to the general ghastliness - viz., my Aunt Dahlia.”

“‘Jeeves,’ I said, ‘I have had occasion to express the view before, and I now express it again fearlessly - you stand in a class of your own.’

‘Thank you very much sir. I am glad that everything proceeded satisfactorily.

‘The festivities went like a breeze from start to finish. Tell me, were you always like this, or did it come on suddenly?’

‘The brain. The grey matter. Were you an outstandingly brilliant boy?’

‘My mother thought me intelligent, sir.’

‘You can’t go by that. My mother thought me intelligent.”

“Unseen, in the background, Fate was quietly slipping the lead into the boxing-glove.”

All I can say is, try one of these books! Well written, great stories, great humour, all done with the delicate and sublime touch of a master wordsmith.