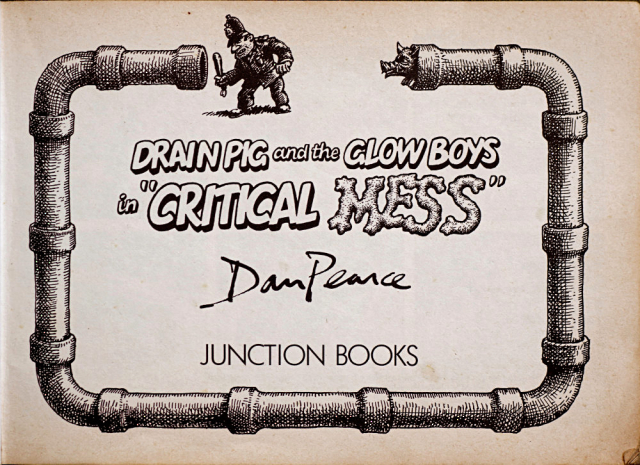 From the back cover of this paperback:

“Marvel at Drain Pig’s triumphs over piggest adversity! Shed tears at the revelation of his poignant porcine past! And revel in the virtuoso performance of Dan Pearce, a welcome new cartooning talent. The strange, subterranean world of Drain Pig is like nothing you’ve seen before… but it’ll leave you squealing for more.”

And it’ll leave you gasping at the complete lack of shame of the swine who wrote the back cover blurb for Dan Pearce’s Drain Pig and the Glow Boys in “Critical Mess”!

All Drain Pig wanted to do was to find his Mum, but he is arrested and fitted up, then sentenced to five years in jail. It’s not long before he is transferred with other prisoners, to work at a dangerously leaky atomic power station at Sizemould on the coast. 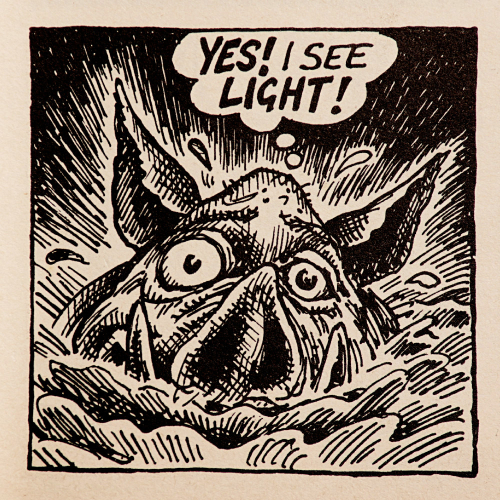 The pig in his element.

This is a nicely drawn comic strip, and it’s a shame that it seems to be the only book about Drain Pig ever made; I would have liked to have seen more adventures of the pipe dwelling Pig.

Dan Pearce has published another comic book, this time about Oscar Wilde. It’s called Oscar, The Second Coming and was published in the middle of 2017.

Even minor characters in Critical Mess are well rounded and believable and there are plenty of details to look out for in the drawings. It’s a book that rewards careful reading.

I couldn’t find much information online, but I think that only 3,000 copies were printed. After 35 years I can’t remember or even imagine how I managed to get hold of my copy, but I’m sure I bought it new.

Critical Mess was published in 1983 and is quite critical of the political climate of the time.  There’s greed and corruption, (isn’t there always!) and the power station is of course making weapons grade plutonium. But this is all part of the story.

If you can track down a copy, it’s well worth it.

In the first panel, L to R, are: Marlon, Maisie, Boot, Baby Grumpling, and Wellington.

I grew up with The Perishers, or rather, I grew up and they didn’t. Like many cartoon characters, they’ve remained the same age ever since the strip started in the Daily Mirror in 1958. I was born in 1959.

The Perishers are some kids and a dog who live in the imaginary South London borough of Croynge. The borough has Victorian streets and bomb sites with dumped prewar cars and other rubbish of interest to kids. One main character, Wellington, lives with the dog Boot in a disused branch line railway station.