Home Affiliates Commenting... About
Manual Exposure
A View of the Church 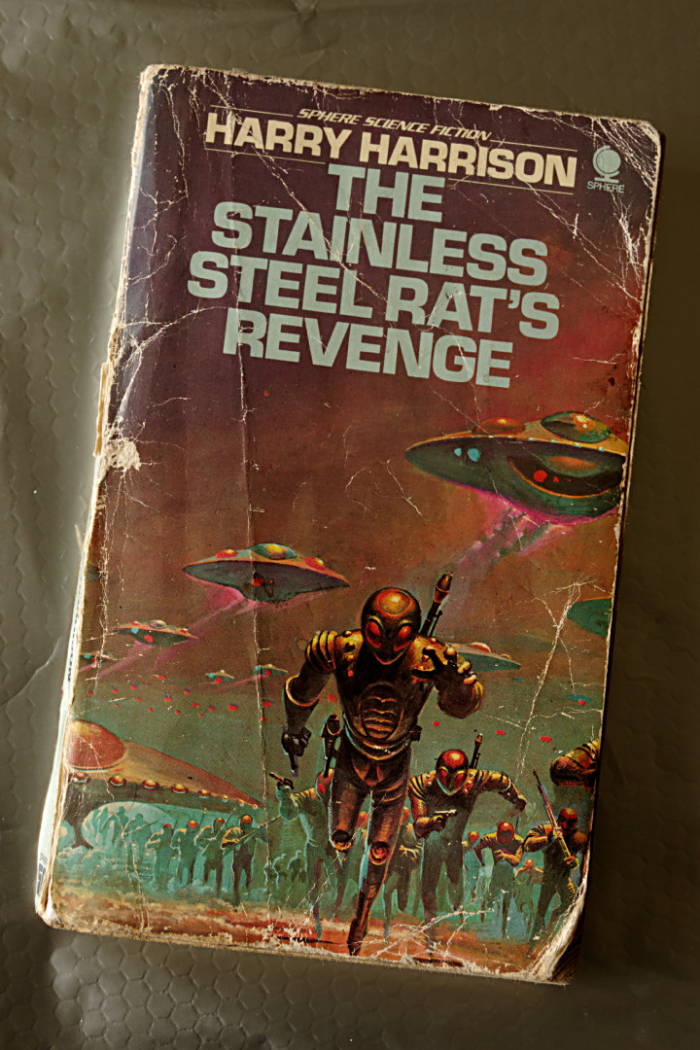 I had read every single book that interested me in the children’s section of my small local library, and I was hungry for more. I wasn’t quite old enough to officially borrow adult books, so my mum lent me her adult library card.

For the first time I could look at books to borrow, in the adult section of the library. One of the first books I took home that day was the yellow jacketed Gollanz edition of Harry Harrison’s excellent science fiction novel, The Stainless Steel Rat’s Revenge.

This is the book that introduced me to James Bolivar DiGriz, AKA Slippery Jim, AKA The Stainless Steel Rat; criminal, con man, and all round rogue of the far future.

In this book, the second in the series, DiGriz is now working for The Special Corps, and sent on a mission to discover how one planet can do the impossible; successfully wage interplanetary war.

"The distance-time relationships just don’t make this kind of warfare practical. When every soldier and weapon and ration has to be lifted from the gravity well of a planet and carried across space the energy expenditure is considerable, the transport costs incredible and the cost unbelievable.

If, in addition, the invader has to land in the face of determined opposition the invasion is impossible. And this is inside a solar system where the planets are practically touching on a galactic scale. The thought of warfare between planets of differing star systems is even more impossible." 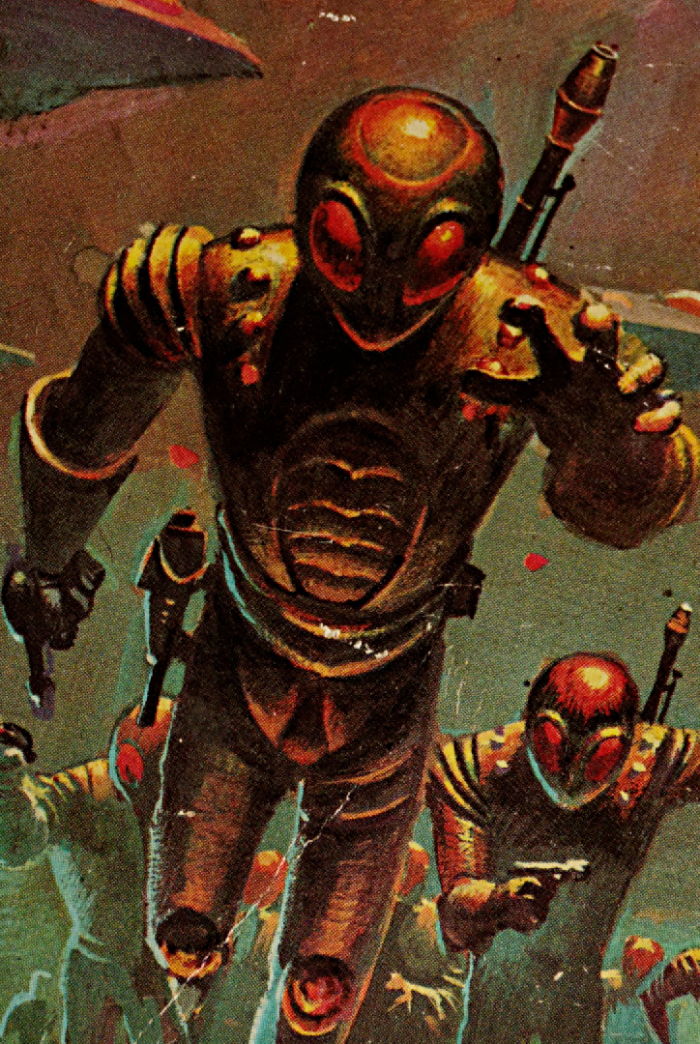 DiGriz travels to the invader’s planet, Cliaand, and discovers the mysterious Grey Men, who seem to be running things. But who are they?

Glorious Cliaand! All wear a uniform. DiGriz is made to wear a uniform too, and it makes him look like a giant wasp with its wide yellow and black stripes:

"Uniforms! That single word does not convey the bemedaled and multicolored glories that surrounded me. Everyone wore a uniform of some sort with the different colors, I am sure, denoting the different branches and services. None of them were striped yellow and black. One more handicap placed in my way but I shrugged it off. When you are drowning who cares if a teacup of water is poured over your head. Nothing about this piece of work was going to be easy."

"The robot pusher (controlling robot dustbin men) was dressed in a uniform of a decomposed green in color, no doubt symbolic of his trade." 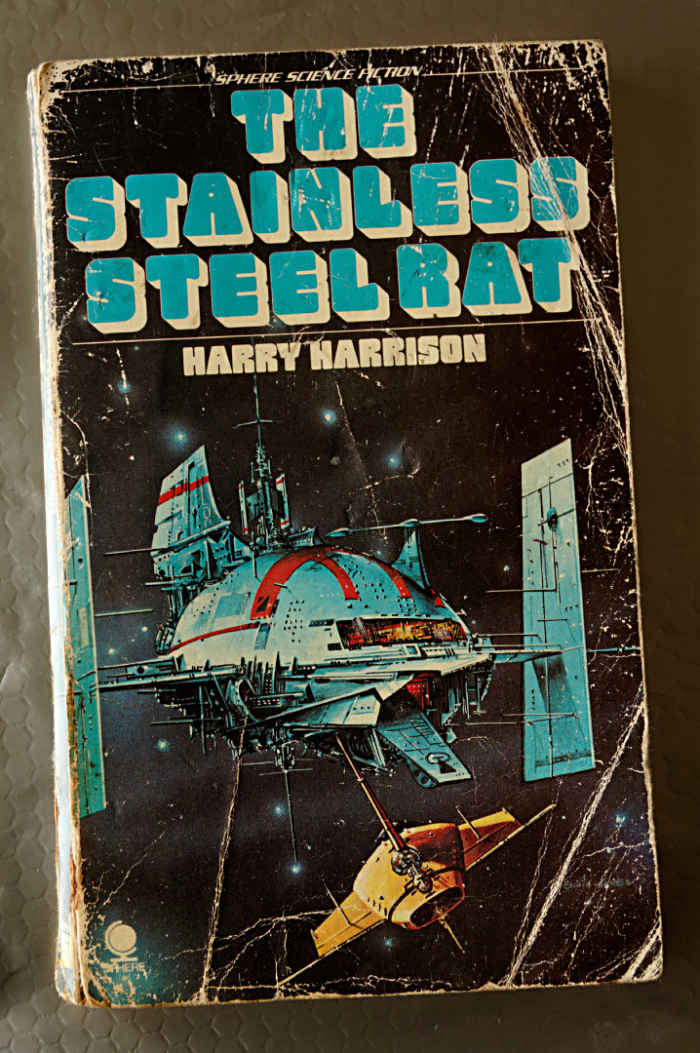 There are a dozen Stainless Steel Rat novels, and the tongue in cheek adventures of our swashbuckling anti-hero make a popular series. It wasn’t long before I found the first book, The Stainless Steel Rat, and enjoyed that too. (Above) 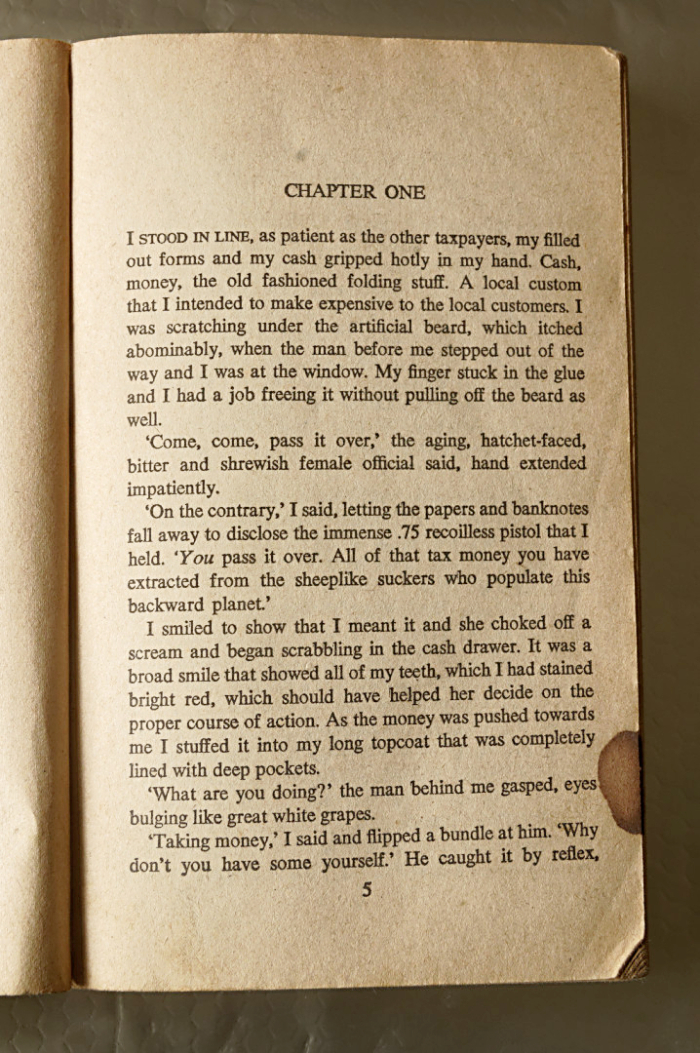 The first page of The Stainless Steel's Revenge.

The edition you see here is one I bought in the late 1970s. As you can see I’ve read it, er, several times. I also bought The Stainless Steel Rat, the first in the series where the Rat is enrolled in the Special Corps, and in theory gives up his life of crime. As you can see from the first page of the second book (above) that just doesn’t happen…

It's been so long since I read one of these books, but who can forget a name like Slippery Jim DiGriz? His ability to con his way out of a tight spot was intriguing. Finding this reminder of my early sci-fi experience was totally gratifying. Thank you.

Harry Harrison came up some good names, like Colonel Kylling in Planet Story, (illustrated by Jim Burns) and Petty Chief Officer Deathwish Drang in Bill, the Galactic Hero. I don't think the Rat would have liked them much, though.

I'm trying to show in this blog what books can mean to people; it seems to be working! There are sci-fi sections in most used book shops; with a bit of luck you can find one of the Stainless Steel Rat books.