Home Affiliates Commenting... About
In The Face Of….
Writing in Your Room 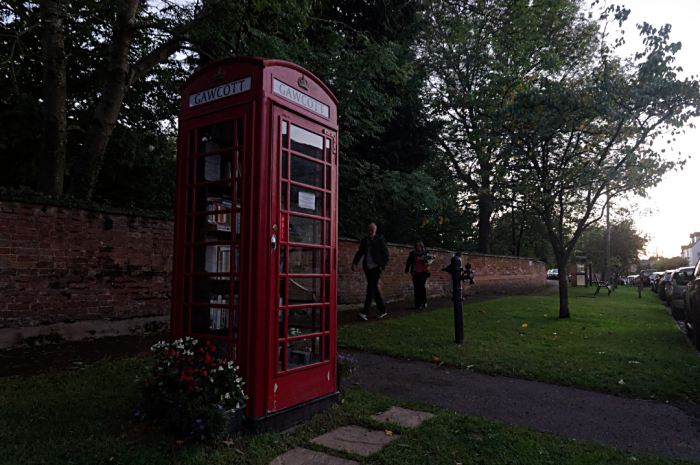 It had stopped raining in mid afternoon and the skies had cleared so I’d gone for a ride on the bike. I took the opportunity to go to Hillesden Church to take photos for my other blog but now I was riding home. It was dusk, on the last Sunday in September.

As I rode along Main Street in Gawcott I spotted a phone box mini library and realised what it was immediately. I parked the motorcycle and got the camera out.

I had read about this one online, but I couldn’t work out if it was still in operation so I forgot all about it. Then I spotted it here by the churchyard wall. Inside it’s the usual arrangement; children’s books are on the lower shelves, adult’s books above.

Some of the shelves have books two rows deep, so this mini library is well stocked. It doesn’t say ‘Telephone’ in the white glass at the top but instead ‘Gawcott’, in a similar font. 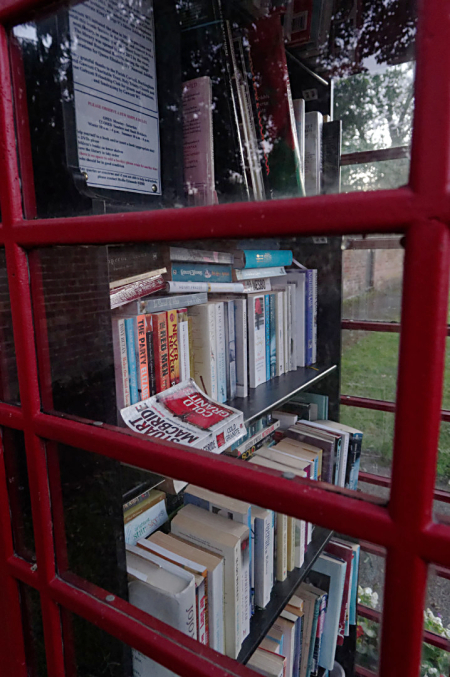 Lots of books to choose from here.

I talked to Millie Edmunds and Margaret Hodges of the Gawcott Women’s Institute, who told me all about the mini library and how it came to Gawcott.

In 2012, the Queen’s Diamond Jubilee year, the Gawcott W.I. wanted to commemorate the local Gilbert Scott family. The architect Sir George Gilbert Scott (he designed the Albert Memorial) had been born in Gawcott in 1811.

His grandson Giles Gilbert Scott was also an architect, and designed the well known red telephone box, the model K6, known all round the world. The W.I. thought that the nicest idea they had for this commemoration would be to purchase one of these boxes and turn it into a mini library.

The box came from somewhere in East Anglia, I was told. It had already been refurbished.

There had been a model K6 box (perhaps I should say ‘Kiosk’) elsewhere in the village but it had already been removed. You can see a much later three cornered phone kiosk a little way from this mini library, but it has no phone.

The General Post Office commissioned the design in 1935 to commemorate the Silver Jubilee of King George V, so that went nicely, I suppose, with the general idea of the phone box library and the Queen’s Diamond Jubilee. 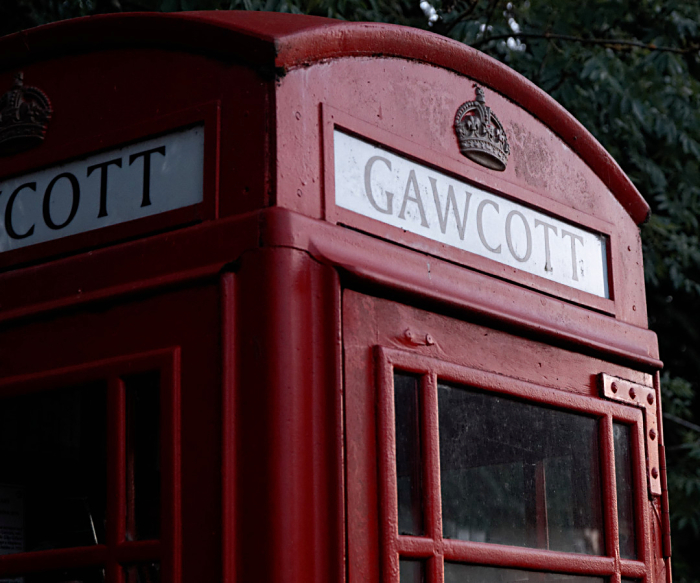 Hillesden and Gawcott are close together in Buckinghamshire, not far South of Buckingham. The Tudor crown above the sign shows that it's a pre 1955 kiosk.

Members of the local W.I. take turns to look after the library and lock and unlock it. Children love the little library and will often visit it after school, Millie and Margaret told me.

One difference between this one and the ones at Flitton and Woburn in Beds that I wrote about before is that this one isn’t open all the time; it has a neatly installed Yale lock and is open Monday to Saturday, from 10 am to 4 pm in the winter and 10 am to 6 pm in the summer. It’s closed Sundays and bank holidays.

I've written about these phone box libraries before, here.

Margaret said that she thinks there might be another phone kiosk mini library at Dadford, near Stowe in Bucks. I will see if I can find it. Do you know of any others?