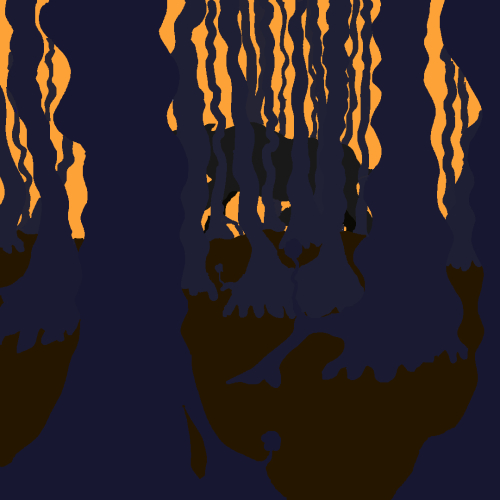 Here's another short science fiction story I've written. This is its first public showing. If you like this, then try my first story, here.  If you want to try some more science fiction short stories, then this looks like a very good place to start. The book at the link has stories from many of the masters of science fiction, and you will be able to try many different writing styles, and see which ones you like.

I’m Jake Robinson, chief and only exobiologist at the big colony here on Argo 4. It’s an Earth type world with about 95% Earth gravity, and here in the temperate zones it’s mostly woodland with frequent large clearings. I’ve been leading a small team that's following a small group of the eight legged spider deer through the woods and hills.
To avoid predators and to be able to track the deer without disturbing their behaviour, we were dressed in woodland camo gear. Jim and Angie are more tree shaped than I am, both being a tall and skinny 1.9 m, to my broad shouldered but 1.78 m height. They tell me it makes them harder to spot amongst the trees than I am.

We’ve been out for six days and nights now. Angie Marr is our tracker, and Jim (no last name) is our safety man; there’s one or two big predators on this planet.
We were following the spider deer as they went from one scraped out, hidden under a bush lie, to the next. It’s always under a station bush, because the spider deer like the fronds. There were seven in this group of deer, all adults, all about a metre tall to the four paired shoulder joints. Of course, they are not really deer; they just look a bit like them if you ignore the extra legs. They also occupy the same sort of niche that some deer do on Earth.
Their leader was a little taller than the rest, had the bulk that the senior males get after their ninth year, and a distinctive grey patch over the front shoulders. We called him Big Joe. Our party was following them for my research project on the deer.

For half of the shortish year this planet has, the spider deer are nowhere to be seen, then they seem to appear all at once, everywhere. Half a year later they are gone again, apparently all on the same day. It’s a puzzle. Disappearance day this year was a couple of days off at the most.
Another puzzle is that the spider deer have forward facing eyes and seem to have opposable thumbs (toes) on the front pair of legs, yet use no tools. Opposable thumbs and forward facing eyes is what enabled humans to develop tools, then in time civilization, but the spider deer have been here a very long time yet have no technology.

The spider deer have only one apparently close relative, an eight legged aquatic beast fifteen or twenty feet long that lives in the shallower parts of the seas, all year round. Everything else we’ve found here has a six limb layout. I suppose that’s a puzzle too.
It was dusk, so we expected the deer to be finding a lie for the night very soon. “I think the next lie is in there”, said Angie quietly, pointing to a large clump of the grey green station bushes some distance away across the large clearing. I could see the deer group ambling along almost aimlessly, then they turned as one and disappeared into the station bushes. We had observed the same behaviour before. It was as though the deer didn’t quite know where the lie was, but when they got close enough something got their attention, and in they went.
I observed for another hour via binoculars and a pair of narrow angle microphones. The deer were making their usual bedtime snuffling noise; they were in for the night.

“We’ll back off now, that’s it for today” I said. I left a microphone and camera running strapped to a tree, and Angie started to back us away to our usual 4-500  metres back from the lie, to make camp. We had gone about half way when Angie stopped short and held her right hand up, palm forward. It meant stop, now. We stopped. She pointed to our left. There was something very big moving between the trees, maybe 70 metres away.
Jim silently raised his beam rifle. “If it comes,” he said, “move clear of me and each other and get ready to fire”
We drew our own beam guns. Whatever it was, it was moving very slowly. Stalking, I thought. I was very glad we were upwind. For a moment, I saw it through the trees. It was a supertigger! Much taller and broader than an Earth tiger but with similar markings, it could leap far and fast and could outrun anything it went after. Six legs, of course, with two pairs at the back. Claws all round. Two rows of teeth.
It passed us by. We didn’t make a sound and it passed us by.
After a while, “That’s the biggest one I’ve ever seen”, said Angie.
“Me too”, said Jim. “I don’t think I could have stopped it. Of course, it would have spotted you first, Jake.”
“Whatever, tree boy. It would use you as a toothpick, since there’s not a scrap of meat on you” I said, “but I’ll check the camera” I looked at my monitor and could see the supertigger move across the clearing, still stalking. It was heading straight for the lie. I swore.
Then it stopped, paused for a minute as if puzzled, then turned left and walked around to the other side of the clump of station bushes, and out of sight.
“It was nearly on the lie, nearly found itself a huge meal, and it just walked around it and away!”
“Perhaps the deer group has moved to another lie” said Angie.
“No, I can still hear them snuffling”
“Either way, we need to get a lot further away before we make camp”, said Jim.

In the morning, I checked the monitor while we had breakfast. Generally you can hear spider deer mumbling and moving about, getting ready to move on. There was nothing. No sign of them on the screen, no sound, even when I scanned back through the recording from two hours before dawn.
“I think we are out of business” I told the others, and explained why.
“It looks like that supertigger came back. No rush, then”, said Jim,”If we are going to have a look, then the more time we leave it, the happier I’ll be”
A couple of hours later, Angie led us back to the clearing. We stood within the trees across the clearing and just listened and looked for ten minutes.  It seemed safe enough, so we walked across to the lie. The spider deer were gone, but there were no signs of the supertigger having them. No blood, no signs of a struggle or of flight, nothing.
Angie cast around the lie. “There’s recent prints in, but none out. Why aren’t they still here? She stepped into the lie beside me and Jim, and with us all in the lie, I saw our surroundings shimmer and grow pale; the typical sign of being in a matter transporter and the last thing I expected to see.
We rematerialised in a very large, artificial space. We were surrounded by spider deer; thousands of them. They filled the space. About a hundred of the nearest ones turned and looked at us, without fear. I recognised Big Joe.
“Hello”, he said, “This is our sapient stage. Like you, I am an exobiologist”