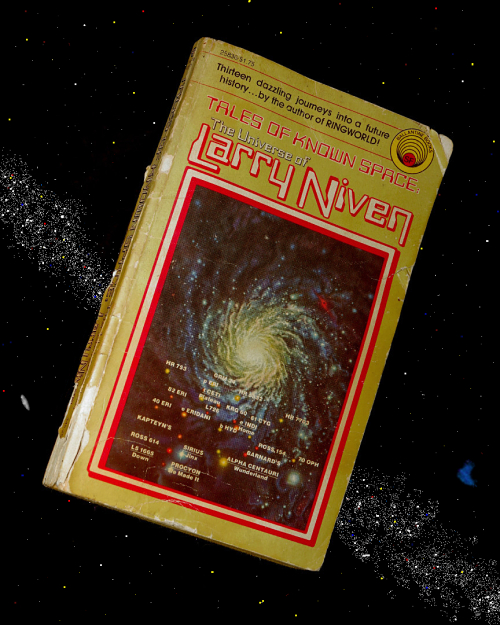 Tales of Known Space, in space.

Tales of Known Space is another book I’ve had for a long time, and I most likely bought it in 1975 when I’d first started work aged sixteen and had a bit of money to spend.

That means I probably bought it from W.H. Smith in Buckingham, (still there) or Weatherhead’s book shop (now long gone) in Aylesbury. These were the two nearest biggish towns to me then. I found all sorts of new and used gems in Weatherheads, which had tall, packed shelves and piles of books on the floor.

I think this is one of the first of many books I bought written by Larry Niven, and his novel Ringworld was another. (See below)

It’s a collection of thirteen short stories, early tales about the universe he created.

The first story in the book is Niven’s first publication. The Coldest Place (1964) is about a scientific expedition to Mercury, when it was believed that Mercury kept one face to the sun, much as our moon does to Earth. It was first published at about the same time that scientists discovered that it doesn’t keep one face to the sun after all. Oh well.

Keeping up with science is a bit of a hazard with science fiction. I’ve read quite a few stories and full length novels about Mars. Each one describes a different planet, and each one reflected the scientific beliefs of the day, now outdated. But in the end, what matters is the quality of the story. To rewrite the tale as knowledge changes would wreck it; the limitations and advantages of the planet as it was believed to be shape each story.

There are three stories of Mars in this volume: Eye of an Octopus, How the Heroes Die, and At the Bottom of a Hole.

Eye of an Octopus introduces the Martians in Larry Niven’s Known Space universe, different of course to everybody else’s Martians. The expedition to Mars has found a long dead Martian and an artifact, under the sand.

“The artifact, now uncovered, showed more detail. Yet the detail had no meaning. Thick bent metal bars, thin twisted wires, two enormous crumpled circles with something rotted to what had been their rims —and then Henry’s imagination clicked, the same visual knack that had gotten him A’s in topology, and he said, “it’s a bicycle”

In How the Heroes Die; there’s been a murder on Mars. The town is under a evvironmental bubble:

“Only sheer ruthlessness could have taken him out of town alive. The mob behind Carter hadn’t tried to guard the Marsbuggies, since Carter would have needed too much time to take a buggy through the vehicular airlock. They could have caught him there, and they knew it. Some were guarding the personnel lock, hoping he’d try for that.”…

…”They never expected him to run his vehicle through the bubble wall.”

Mars is At the Bottom of a Hole: In Belter slang a hole is a gravity well, usually a planet or a moon that’ll pull you in if you get too close. Belters live and mine in the asteroid belt. A Belter smuggler is trying to escape the law, and finds himself on Mars. He has spent his life in space, and has never been on a planet before:

The sky is flat, the land is flat, and they meet in a circle at infinity. No stars show but the big one, a little bigger than it show through most of the belt, but dimmed and red, like the sky. It’s the bottom of a hole, and I must have been crazy to risk it. But I’m here. I got down alive. I didn’t expect to, not at the end” 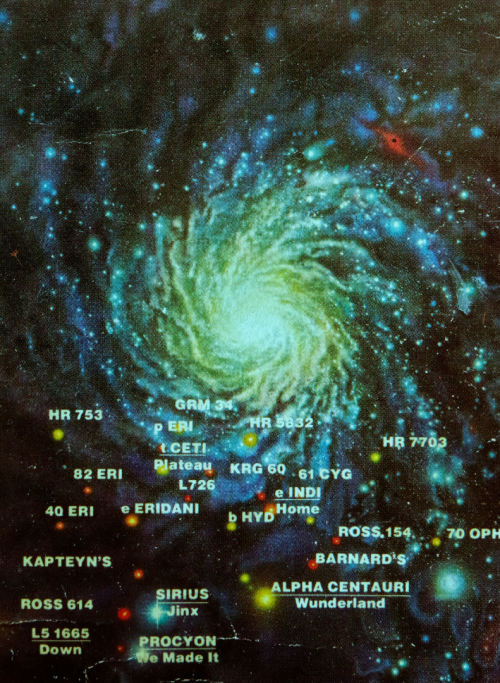 At the back of the book, the cover artist Rick Sternbach describes how he painted the front cover illustration. He says:

“If you look carefully, you’ll find all fourteen black holes, two Puppeteer-built General Products spacecraft hulls, egg-shaped Jinx, and . . . there. The Ringworld, too, of course”

I’m sure they are there, but I’ve never been able to find them all. You may have better luck. The cover is a bit battered now, which doesn’t help; the white lines you can see are not rifts in the spacetime continuum, but cracks in the front cover board…

Jinx is a very large moon, shaped like an egg or a rugby ball. The equator is a high pressure zone where humans can’t live. The poles stick out of the atmosphere; they are in vacuum. Humans live in the two bands between the equator and the poles.

The Ringworld is a huge artificial ring about a million miles wide and a diameter very similar to the Earth’s orbit. There’s a star at the centre. Human-like species can live on the inner surface, which has hills and mountains, plains, rivers and seas. It has the habitable surface area of about three million Earth sized planets; you would never, ever, run out of room. Larry Niven wrote about it in his book Ringworld.

Tale of Known Space was one of the books that introduced me to Niven’s work. This is good, ‘hard’ science fiction. That is, technology drives the stories. If this is what you like, give Larry Niven a go.

Do you have books you’ve owned for a long time? Books, like this one, that led you into buying more books by that author?

Oooh, interesting point re: how our fictional depictions of Mars have changed as our scientific understandings have! I had honestly never thought about it before, but you're quite right, books set on Mars from different time periods describe completely different planets! I wonder how outdated Andy Weir and his contemporaries will seem in a decade or so... hmmm...

I have a handful of books that I've owned for a while - a couple were gifts from my father (The Hobbit, and 1984) when I was young, which I adore and treasure. But most of the really, really old books I own are actually ones I've inherited or purchased secondhand. Those are my favourites, the ones that I've given new life too, the ones that live on even though their original owners have perhaps passed...

it all depends on what technology comes into being in the next decade. A new discovery could make space exploration or living off Earth more practical, or allow more accurate long distance observation.

I suspect that Andy Weir's The Martian will become outdated in some details, but because of the present state of technology much we know about Mars now will not change.

But there's no telling; lasers are commonly used now, but who could have imagined they would be in the home, inside a machine that plays DVDs?

Instead, we thought "Lasers? Space battles!"