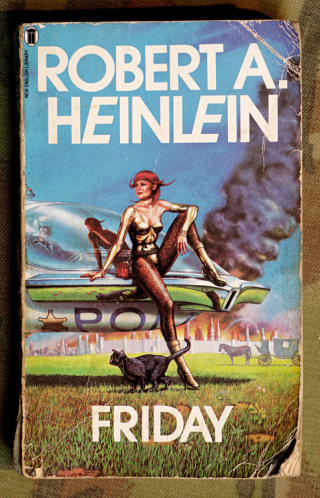 I bought my copy of Robert Heinlein’s book Friday in 1985, and I’ve read it at least once every year since then. Heinlein is one of my favourite authors. Let me show you why.

From the start of chapter 1:
“As I left the Kenya Beanstalk capsule he was right on my heels. He followed me through the door leading to Customs, Health, and Immigration. As the door contracted behind him I killed him”

“I have never liked riding the Beanstalk. My distaste was fullblown even before the disaster to the Quito Skyhook. A cable that goes up into the sky with nothing to hold it up smells too much of magic. But the only other way to reach Ell-five takes too long and costs too much; my orders and expense account did not cover it.

“So I had been edgy even before I left the shuttle from Ell-Five at Stationary Station to board the Beanstalk capsule… but, damn it, being edgy isn’t a reason to kill a man. I had intended only to put him out for a few hours.

(But) “the subconscious has its own logic…”

Right from the start and in less than 150 words, Heinlein has told us about Friday and the world she lives on. The Kenya Beanstalk is a space elevator, which even now we don’t have the materials to build; this is the future. Friday has been off planet, but is now back on Earth.

She kills the man who is following her; now we know that Friday is trained and prepared to do this if necessary. Not halfway through the front page, and we are right into the story; we want to know more. This is how to write a book!

As this book is written in the first person, we get an insight into Friday’s hopes and fears. She fears that she doesn’t belong; that she is not part of the human race. She is an AP, an Artificial Person. An artifact. To some, a creature not of God’s law.

She is the product of genetic engineering, which has made her fast, strong, intelligent. Ideal for a combat grade courier, who must get through. But she finds some social customs impossible to understand; this is because she is an AP. In that respect it’s rather similar to having Asperger’s Syndrome. 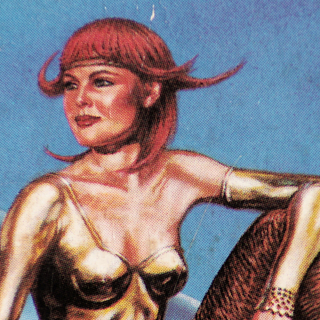 From chapter 15:
“ ‘The people’s right to know’ — the people’s right to know what? Daniel Shipstone, having first armed himself with great knowledge of higher mathematics and physics, went down into his basement and patiently suffered seven lean and weary years and thereby learned an applied aspect of natural law that let him construct a shipstone.

“Any and all of ‘the people’ are free to do as he did — he did not even take out a patent. Natural laws are freely available to everyone equally, including flea-bitten neanderthals crouching against the cold.

“In this case, the trouble with ‘the people’s right to know is that it strongly resembles the ‘right’ of someone to be a concert pianist - but who does not want to practise.

“But I am prejudiced, never being human and never having had any rights”

Daniel Shipstone realised that while energy was abundant, what was needed was a way to store it. He invented the shipstone, which stores huge amounts of energy in a very small space and weighs little. The invention of this device drove down the cost of energy to the world.

The shipstone is a cornerstone of civilisation in this book. They are everywhere. In ocean freighters and spaceships, in buildings and vehicles, tools and appliances. Friday has a small torch with its “own tiny lifetime shipstone”.

Heinlein believed strongly that people should make the effort to improve their own lives; that they should strive to better themselves and the situation they were in, as Daniel Shipstone did.

He is most critical of those who want something for nothing, who don’t want to make the effort but expect to be rewarded anyway; those who expect that all should be rewarded equally, regardless of what good or bad life decisions they have made.

Instead, he believed in striving to improve one’s lot and one’s self, gaining knowledge and experience.

The last line here shows Friday’s hurt at being forever on the outside looking in.

This is a complex and engrossing novel of over 400 pages. You will not guess how this story ends up, or even how it gets there.

Rising into the future 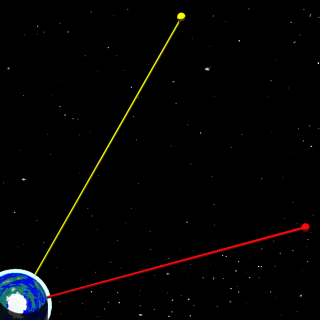 Seen from above the pole on this imaginary planet, the skyhook (yellow) and space elevator (red) are fixed at or above the equator. (Not to scale)

The Kenya Beanstalk, a space elevator, is fixed to the Earth at the equator. It’s a thick cable made of a material with an extremely high tensile strength, and it extends out into space for thousands of miles. There’s a weight on the far end which ensures that the cable stays taut and vertical as the Earth turns.

A capsule carries goods and people up and down the cable.

Climbing out of Earth’s gravity well is the most difficult and costly part of going anywhere in space. But as Heinlein says elsewhere, Earth orbit is halfway to anywhere.

Once this space elevator is built, the cost of carrying anything into Earth orbit is tiny compared to boosting it to escape velocity (going up so fast that gravity doesn’t pull you back) using the huge cost and complexity of a rocket.

The Quito Skyhook was also positioned at the Equator, but in Ecuador. Heinlein doesn’t say any more about it, but a skyhook is similar in appearance to a space elevator, although the cable is not connected to the Earth; it only reaches into the upper atmosphere. Here's more information about Skyhooks.

Ell-Five, or L5, is one of the Lagrange points; a stable point in space between (in this case) the Earth and the Moon where something, like a satellite, once put there will stay there. This is where Stationary Station is. It’s a big satellite. A space city.