Mars is a dangerous place. It’s cold, there’s almost no atmosphere, you can’t live off the land because nothing grows.

From the back of the paperback:

I have no way to communicate with Earth.

If none of these things happen, I’ll eventually
run out of food and starve to death.

This pretty much sold me, so I read a few pages to make sure, then bought the book. I was pleased to find a year later that it had been made into a film. 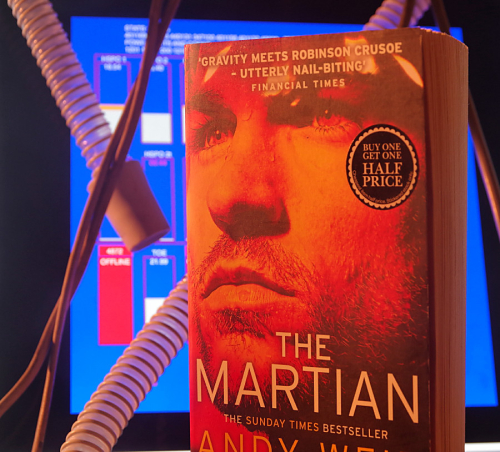 Mark Watney is the man stuck on Mars. He has to adapt the equipment the expedition brought to Mars, or die. Here, he is making water:

“Standing on the table with a sparker in one hand and my oxygen line in the other, I reached up and gave it a try.

“And holy hell, it worked! Blowing the O2 over the sparker, I flicked the switch on the flashlight and a wonderful jet of flame fired out of the tube. The fire alarm went off, of course. But I’d heard it so much lately, I barely noticed it anymore.

“Then I did it again. and again. Short bursts. Nothing flashy. I was happy to take my time.

“I was elated! This was the best plan ever!…”

“…Everything went great right up to the explosion.”

This is a book that might have been written in the Golden Age of science fiction. There’s humour and humanity, a great story, and scientific facts drive the plot forward. I stayed indoors all day and read it for the second time last Saturday, while there was a bitterly cold wind and snow on the ground.

Land mass is about the same as on Earth. it’s a much smaller planet but there are no seas; there’s little or no water on Mars.

Gravity is 38% of Earth’s. There would still be just as much of you, but you’ll weigh less, bounce more.

Atmosphere. Nope, not so you’d notice. You can’t breath it anyway.

Summer temperature near the equator where Watney was stranded: -73ºC at night, rising to a toasty -30ºC in the day. With the wind chill, it was about -8ºC or -10ºC in my garden on Saturday, and I thought that was cold.

The day is longer; you’ll get 39 more minutes in bed!

There’s more detailed facts about the Red Planet on the NASA website.

The Martian by Andy Weir